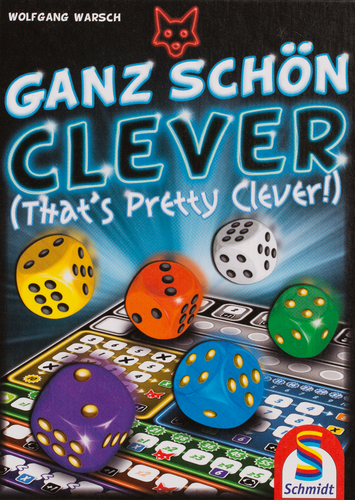 Held in high regard in the board game community, Ganz Schön Clever (That's Pretty Clever) is a roll and write family game from designer Wolfgang Warsch. Players will need to plan their moves carefully as dice that you don’t claim for yourself may be offered to your opponents. Difficult choices and the opportunity to unlock combos and additional moves such as rerolls and extra dice add to the appeal of this game.

This fun, colourful dice game is suitable for beginners and more experience players alike. It also offers a solo gaming experience. This is the game you should play instead of Yahtzee!

This is a fabulous game that could be considered Yahtzee on steroids. Simple yet strategic. Accessible to newcomers and yet able to satisfy seasoned gamers alike. It really does offer exceptional value for money with the amount of plays you will get from the small box. Ganz Schön Clever really does live up to its name - it is indeed pretty clever! - Read more at Board Game Review UK