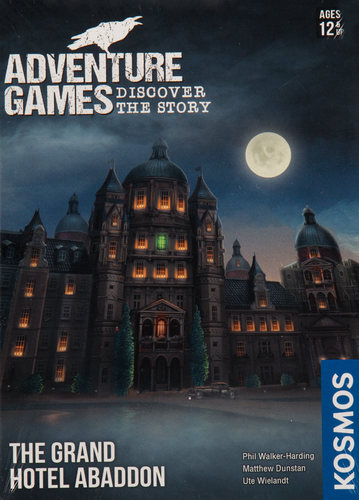 It's been a long year, and you've been looking forward to a nice, relaxing vacation at the Grand Hotel Abaddon. But what started out as a quiet retreat has become something else entirely. Strange things have been happening all around you. Could ghosts be behind these mysterious incidents, as the other guests and hotel staff seem to believe, or is there a more rational explanation? How the Story unfolds is up to you!

Kosmos Adventure Games: unlike the co-operative EXIT: The Game series, titles in this series focus on the telling and discovery of the story with no time pressure.  That said, many different paths can be experienced during play, with more than one correct resolution to the story waiting to be discovered. Each title consists of three chapters, each taking about 70-90 minutes to play. Nothing is destroyed, so the games can be played multiple times. Like the choose your own adventure books from days gone by.