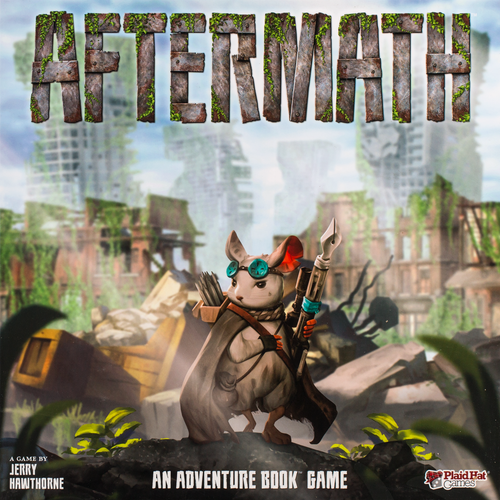 Aftermath is a dramatic new entry in the Adventure Book Game series featuring over 20 story-driven missions and side missions. Humans have mysteriously vanished only animals struggling for survival in a shattered world remain.

In the game, players take on the roles of an unusual group of rodents known by their colony as "providers". There's a hamster that talks fast and drives faster, a guinea pig with a temper, a small mouse with keen eyes and a lot to prove, and a mysterious vole who's borderline feral. These characters each have their own personalities, play-styles, and personal goals.

You'll leave the safety of your colony, seeking to build a new world by repurposing old scrap and eliminating those predators who have no interest in rebuilding the landscape. Along the way you must scavenge for food and water in order to survive.

Return to your colony with resources and information that will help your friends and family thrive. Keep your colony safe by building structures and improvements with the rewards of your adventures. Plan accordingly as your colony will face hardship each time you leave it.

Gloomhaven: Jaws of Lion.  Based on the highest-rated board game of all time as rated on board

The Snallygaster Situation: Kids on Bikes Board Game

The Snallygaster Situation: Kids on Bikes Board Game.  You know that something is very wrong in