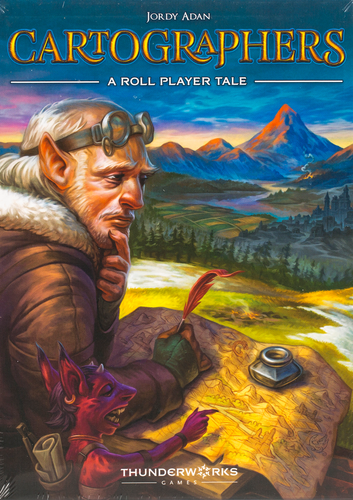 As a cartographer in the service of Queen Gimmax you are sent to chart her territory in the northern lands. But despite the barren wilderness, you are not alone.

In Cartographers: A Roll Player tale, the four seasons will pass. During that time you will compete to earn the most reputation stars by reclaiming land from the Dragul. The Dragul’s outposts may hinder your attempts to gain the lands which Queen Gimmax prizes most. To reduce their control you must draw your lines carefully.

The player who will be declared the most illustrious cartographer in all the kingdom will be the one who restores the Queens lands to their former glory.

Cartographers is set within the Roll Player world.

I’ve loved sharing this game with all our gaming friends. From the first time we played it as a two, we knew everyone would love it and there’s something so rewarding about teaching someone a game you know they’ll love, and it’s a very simple concept so you can be confident that if you’re new to gaming you’ll easily be able to learn it! - Read more at S vs J Board Games

Roll Player: Monsters and Minions Expansion.  An abomination is terrorising villages throughout

Roll Player.  In Roll Player, you compete to create the greatest fantasy adventurer who has eve

Cartographers: Heroes.  As a cartographer in the service of Queen Gimmax you are sent to chart