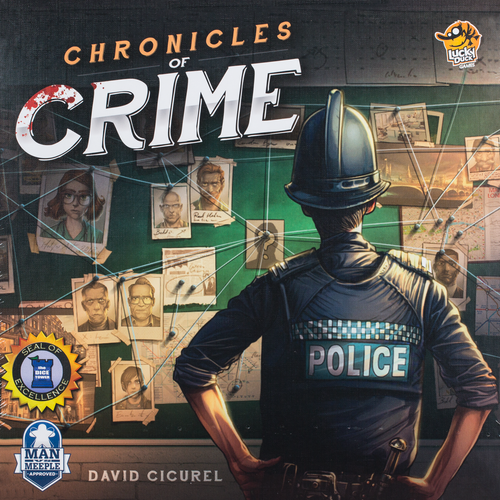 Chronicles of Crime is a story-driven cooperative game of crime investigation which allows you to experience the crime scene as if you were there! There are five game scenarios included in the box but many more available in the app.

Mixing digital “scan and play” technology with a traditional board game it allows for many crime investigations to take place with the same components.

Players must collect evidence, interrogate the suspects, and arrest the murderer before time runs out!

Chronicles of Crime also offers an optional VR experience. Players simply wear the VR glasses (optional additional purchase) and use a mobile phone to search for clues in a virtual world and become immersed in the games unique universe.

Note: a smart phone and app is required to play this game.

Editorial reviews of Chronicles of Crime

Given its low price point, exceptional presentation and ability to bridge the gap between analogue and digital gaming with minimal fuss,Chroniclesis a very interesting prospect. I also love the fact that it can be expanded to a considerable extent in terms of gameplay by adding relatively few physical components, which is a huge boost to the chances of it being expanded further. Given that the app is promising two whole new campaigns, it seems certain that Lucky Duck Games will keep supportingChroniclesfor as long as people remain interested in playing it, which is also great news. - Read more at Big Boss Battle