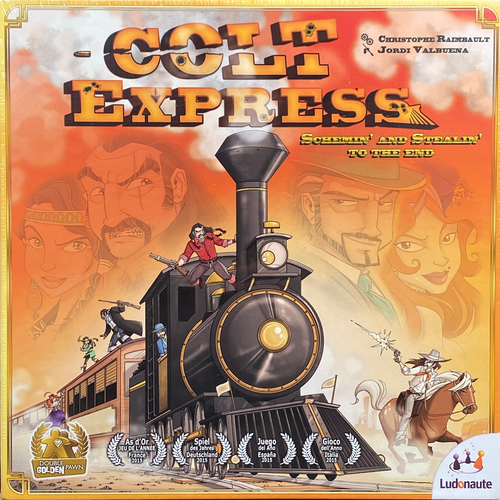 On the 11th of July, 1899 at 10 a.m., the Union Pacific Express has left Folsom, New Mexico, with 47 passengers on board. After a few minutes, gunfire and hurrying footsteps on the roof can be heard. Heavily armed bandits have come to rob honest citizens of their wallets and jewels. Will they succeed in stealing the suitcase holding the Nice Valley Coal Company's weekly pay, despite it having been placed under the supervision of Marshal Samuel Ford? Will these bandits hinder one another more than the Marshal since only the richest one of them can come out on top?

As a bandit on the train you are looking to accumulate the biggest heist while avoiding the Marshal and being wary of your opponents. Playing over five rounds each with two phases this game is lots of fun. The first phase sees you carefully plan out your actions with your deck of cards. During the second phase all players actions play out, often with calamitous but hilarious effects

The Quacks of Quedlinburg

Equinox Purple Box In Equinox, mysterious creatures gather in the forest in an effort to write thems

Gravwell, 2nd Edition.  In Gravwell, players command spaceships that have been pulled thro

Living Forest.  In Living Forest, you play as a nature spirit who will try to save the for