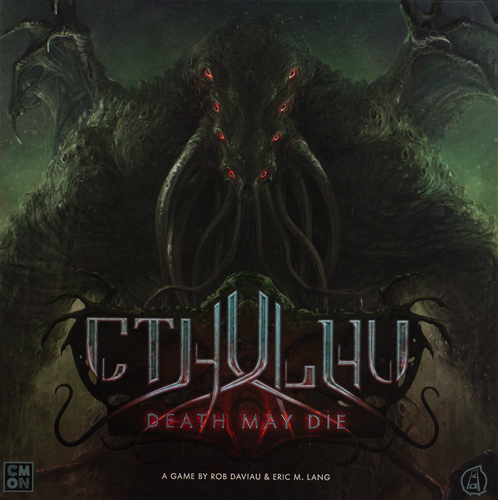 In Cthulhu: Death May Die, inspired by the writings of H.P. Lovecraft, you and your fellow players represent investigators in the 1920s who instead of trying to stop the coming of Elder Gods, want to summon those otherworldly beings so that you can put a stop to them permanently. You start the game insane, and while your long-term goal is to shoot Cthulhu in the face, so to speak, at some point during the game you'll probably fail to mitigate your dice rolls properly and your insanity will cause you to do something terrible — or maybe advantageous. Hard to know for sure.

The game has multiple episodes, and each of them has a similar structure of two acts, those being before and after you summon whatever it is you happen to be summoning. If any character dies prior to the summoning, then the game ends and you lose; once the Elder One is on the board, as long as one of you is still alive, you still have a chance to win.

The episodes are all standalone and not contingent on being played in a certain order or with the same players.

Reviews of Cthulhu: Death May Die

Gloomhaven (6th Printing).  You don’t get to be the number one game on Board Game Geek by

Zombicide 2nd Edition.  Zombicide is a collaborative game in which players take the role o

Eldritch Horror.  Across the globe, ancient evil is stirring. Now, you and your trusted circle