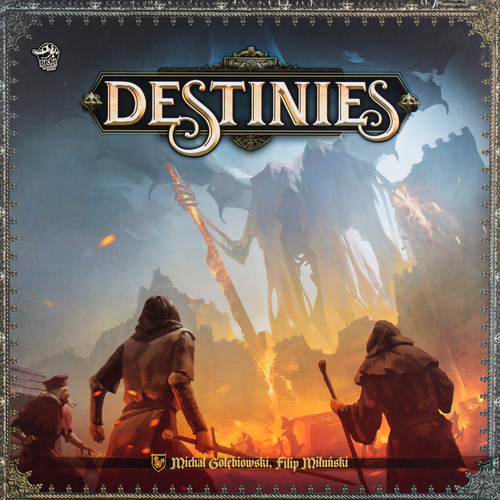 Destinies is the first of its kind. A unique and innovative competitive story-driven RPG-like board game. Mixing a board game with an app and Scan & Play technology, Destinies guides players through an ever-changing medieval fantasy universe.

Destinies does not require a Game Master to play. Each player takes on the role of a hero on a quest competing with other players to solve mysteries and fulfil their destiny first.

The first in a new series of games, Destinies will take you on a one of a kind epic adventure like nothing you have seen before. In Destinies Your choices will change the world forever!

We were really immersed in the app experience and overall story. The game is very well made, the miniatures are great and the dice look really nice too. I love the artwork of the map tiles and how the card backs give a hint as to what is there without giving too much away, although they are cards rather than the thick card we’re used to in other similar games. We can’t wait to play through the other scenarios and highly recommend this game to you! - Read more at S vs J Board Games

Where Destinies comes alive is in its world-building. It does things that you just couldn’t do without the app. The app allows the world to change around you while you play. Sometimes you’ll start a turn and it’ll tell you that something has happened somewhere, and that you need to update the map accordingly. Then you’re left wondering, “I wonder what I missed there”. In a game with inherently limited replayability, it gives you some impetus to go back and try a scenario again, but maybe with a different character. - Read more at Punchboard

Fog of Love.  Playing Fog of Love is like starring in your own unique romantic comedy. You will