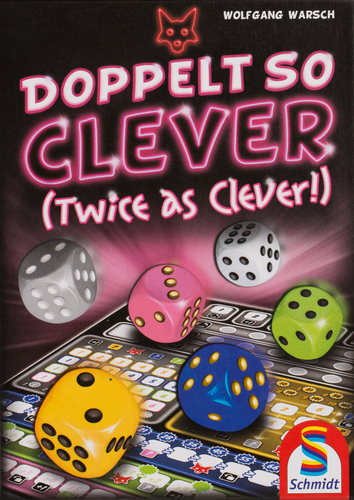 Following on from 2018’s roll and write Ganz Schön clever, you really do have to be “Twice as Clever” to score big in Doppelt so Clever!

On each turn the active player rolls the six brightly coloured dice and can choose to keep up to a maximum of three. The dice left behind can benefit your opponents, so in Doppelt so Clever you must think carefully about which ones you choose to leave behind.

The new colours and scoring methods, combined with a new action beyond those of the earlier game, means that Doppelt so Clever will provide extra challenges while retaining the feel of the original.

This fun, colourful dice game also offers a solo gaming experience. This is the game you should play instead of Yahtzee!

Reviews of Doppelt So Clever

Ganz Schön Clever (That's Pretty Clever) Held in high regard in the board game community, Ganz

SOS Dino Work together as a team, in this fantastically fun cooperative children’s game. Can y

Dice Throne: Season One Rerolled, 4 Treant vs Ninja Treant and Ninja go head to head in this fast-pa