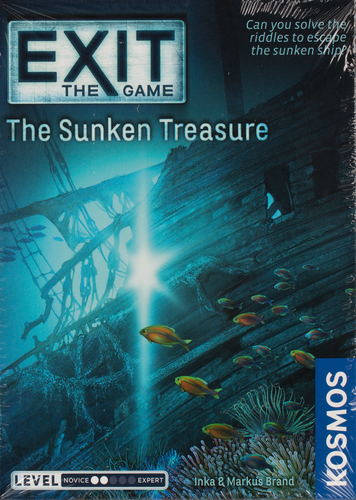 Exit The Game: The Sunken Treasure.

You are trapped deep underwater in the mysterious wreck of the Santa Maria.

Whilst on a quest to locate and retrieve its legendary sunken treasures something has gone seriously wrong. Your only way to escape is to solve the riddles of the wreck. Time is running out and you are concerned not only with saving your own life but with retrieving the fortune too.

Kosmos Exit: The Game series is a unique and exciting range of party games for up to four players. They allow you to bring the experience of an escape room into your home through the ingenious and often intense use of cards and puzzles. The Kosmos Exit games series each involve working as a team to solve a series of puzzles and mysteries.

Note: This is a “one use only” game. In order to solve the riddles you will have to cut, fold and write on some of the recyclable components.

Editorial Reviews of Exit The Game: The Sunken Treasure