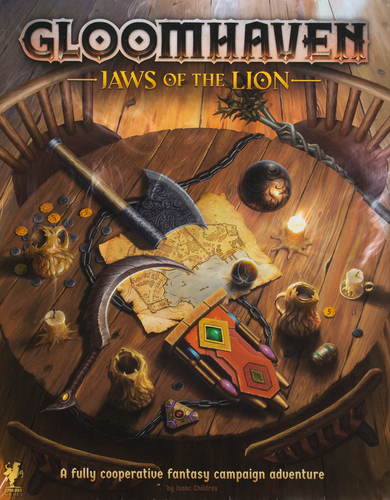 Based on the highest-rated board game of all time as rated on board game geek, Gloomhaven Jaws of the Lion is a fully cooperative game of strategic warfare in a  unique fantasy world.

You are a member of Jaws of the Lion, one of the most notorious mercenary groups in this dilapidated town! When the less fortunate of the city start disappearing it somehow falls to you to find out what’s going on. So long as you get paid for your trouble.

Players take on the roles of hardened mercenaries. Working together you must fight through a campaign filled with challenges, choices and unexpected twists.

Each scenario offers stream-lined tactical combat without dice against fully-automated enemies, where using the right ability at the right time can mean the difference between success and failure.

Including four playable minis (Red Guard, Hatchet, Voidwarden and Demolitionist), each with their own decks and character sheets and 16 unique monsters. Gloomhaven: Jaws of the Lion takes place before the events of Gloomhaven. It can be played as a standalone game or as an expansion to Gloomhaven.

Jaws.  Jaws is a “one versus all” suspense-filled strategy game of two halves. One player takes

Editorial Reviews of Zillionaires on Mars.  Mars is now the Number 1 place to live in the solar

Azul: Summer Pavilion.  At the turn of the 16th Century, King Manuel I commissioned Portugal's