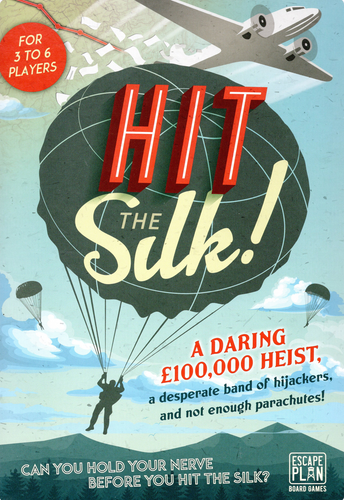 You've just pulled off the heist of your life and have finally got enough to pay back the mob their crippling debt. As you are passing over the ocean and nearing home, the pilot pulls out a gun and launches themself off the plane taking a spare parachute with him. As if that wasn't bad enough he fires three shots at the fuselage as he exits the plan. You and your fellow crew must obtain enough loot to pay back the mob AND have a parachute to land safely before the plane crashes. The player left on board has one last chance to land the plane and possibly walk away with more profit than the rest of the players put together!

Hit the Silk! is a fabulous party game of bluffing, betrayal and cooporation from the people behind Stop the Train! Handcuffs, posion, knives and kung-fu kicks will be flying around amongst dodgy deals before the climactic ending.

Reviews of Hit the Silk!

Hit the Silk! is one of those games that you spend as much time dissecting and laughing about what occurred, as you do playing it. - Read more at Board Game Review UK

The Chameleon.  Everyone knows the secret, except for The Chameleon! In this super-social, word

Snakesss Snakesss is a little quiz game with the three most important ingredients: skill, luck and a

Awkward Guests: The Walton Case Mr Walton has been discovered murdered in the Study. You are sleuths