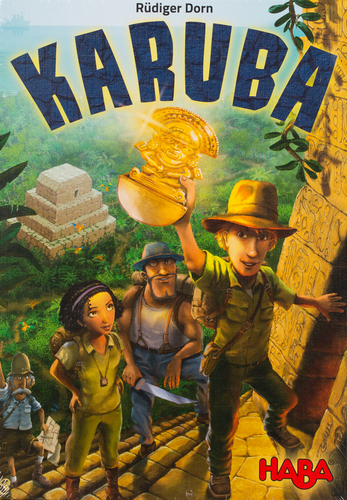 Karuba is the award winning tile laying game where you must guide your adventurers through the tropical jungle on the island of Karuba.

Use your cards to create paths that will allow your adventurers to journey from the sandy shores of the island through the trees to the ancient temples.

Each player receives the same jungle path tiles at the same time and will compete to lay the quickest routes through the dense forest. Discard tiles in order to move your adventurers forward collecting precious crystals and golden nuggets along the way.

The player who collects the most points from reaching the temples first and by collecting the most valuable treasures will be victorious.

I’ve had a blast playing Karuba with friends and family. They have all enjoyed it! While it may not make your brain hurt in the same way as some of the crunchier titles, sometimes you’re not in the mood for that! In those instances, Karuba is a great choice. For all those reasons Karuba has entered into the Board Game Review Hall of Fame. - Read more at Board Game Review UK