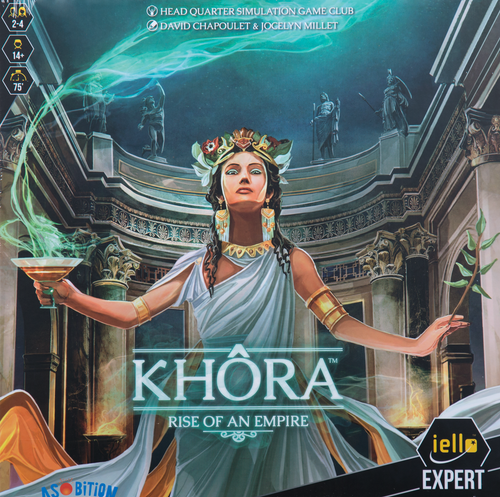 Khôra: Rise of an Empire.

Assert the strength of your city state! In Ancient Greece, City-States (Polis) competed for wealth and power, drawing strength and resources from their Khora: the surrounding countryside.

As the leader of your Polis, you must shape every facet of your city! Develop your Economy, Culture and Military, all while sending troops out to conquer. Attract more citizens, raise taxes, recruit troops and gain GLORY! Choose wisely, you only have 9 rounds!

In Khôra: Rise of an Empire you will choose actions that align with your strategy, but which also work with your die rolls! You will need to adapt your strategy constantly and strengthen your actions by moving your markers up on your economy, culture, and military tracks. If you move up on the taxes track, you can collect highly sought-after Drachmas, the troop track allows you to explore and gather knowledge tokens, and the glory track will let you capitalise on your knowledge.

Unlock achievements and, above all, make sure you have the most points at the end of the nineth round to be crowned with the laurels of victory!

Reviews of Khôra: Rise of an Empire

Atheneum: Mystic Library.  The magic exam is tomorrow so you and your classmates head to the li

Lost Ruins of Arnak.  On an uninhabited island in uncharted seas, explorers have found traces o

Bonfire.  The bonfires are sources of light, energy and warmth created by the guardians of ligh