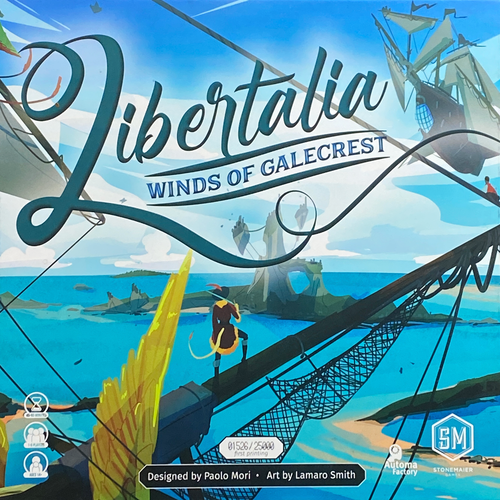 In the world of Galecrest, sky pirates set sail on the winds in search of adventure, treasure, and glory. As an admiral, you command a vast and varied crew...but so do your rivals sailing other ships in the pirate fleet. Each day the fleet lands on a different island where you'll send a crew member to collect your share of the loot, hoping they'll return to boost your growing group of characters.

Libertalia was originally released in 2012. Ten years later, Libertalia: Winds of Galecrest celebrates the foundations of the original design with a revised and expanded edition that includes all-new art, 40 characters per player, a reputation system to resolve tiebreakers, deluxe loot tokens, a robust solo mode, and much more.

Few other games play five and six players with as little downtime as Libertalia: Winds of Galecrest outside of the party genre. With plenty of tactics, skulduggery and replayability, this is a fantastic board game. I cannot foresee a day where I will get bored of playing Libertalia: Gales of Windcrest, it really is that good. - Read more at Board Game Review UK

Sailing the skies with a motley crew in search of treasure, Libertalia: Winds of Galecrest from Stonemaier Games is a fun and exciting ride! - Read more at Favourite Foe

After repeated plays we enjoyed it more and more each time, so if you enjoy the theme (who doesn’t love sky-based pirates?!) and the mechanic of simultaneous action selection, then I would heartily recommend you grab a copy of Libertalia. - Read more at S vs J Board Games

I have no trouble recommendingLibertalia: Winds of Galecrestgenerally — it’s a unique and flexible experience that offers fairly deep gameplay at higher player counts, and it is fun and engaging at all counts, including solo. - Read more at Big Boss Battle

Viticulture: Essential Edition.  In Viticulture you find yourself inheriting a vineyard in rust

Tapestry.  Tapestry is the award-winning civilization game for one to five players by Jamey Ste

Red Rising.  Based on the bestselling novels by Pierce Brown, Red Rising is set in the distant