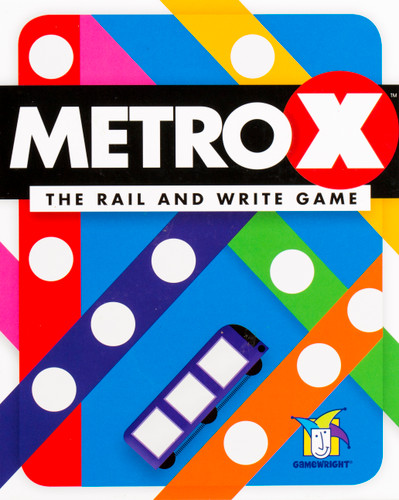 In Metro X, The Rail and Write game, X marks the stops!

Create the most valuable subway. Flip a card and choose your subway line. Then cross off the relevant number of stops on your map. In this flip and write game you will earn bonuses for making transfers and incomplete tracks lose you points. You will need the highest score to become an underground sensation!

Metro X scales brilliantly from one player up. Six player boards are included but additional copies can be combined to seat an almost unlimited number of players around your table (if you can fit an unlimited amount of people around your table!). Everyone plays simultaneously so there’s no hanging around waiting to board this train!

Metro X is a great flip and write game to play with family and friends alike.

I do think Metro X is fairly good fun. It’s fast, accessible and for casual players, it bridges the gap between the kind of Sudoku puzzles that they’ll feel very at home with and brings them into lightweight gaming without making it too obvious. - Read more at Big Boss Battle