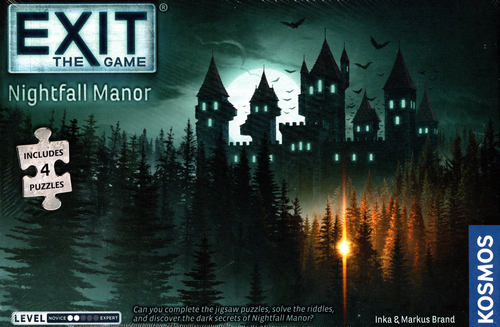 In Exit: Nightfall Manor…. The old man was well-known for his eerie tales of the dark castle on the edge of the forest. Recently, he set out on his own to find the shadowy lord of the manor, but he hasn’t returned. Fearing the worst, you embark on a quest to find him.

You must solve a series of riddles and piece together four jigsaw puzzles to uncover the mystery of Nightfall Manor and save your missing friend.

Note: This is a “one use only” game. In order to solve the riddles you will have to cut, fold and write on some of the recyclable components - although the jigsaws can be done again!

Exit The Game: The Pharoah's Tomb.  On the holiday of a lifetime in Ancient Egypt you get the o

Dead Man on the Orient Express

Exit The Game: Dead Man on the Orient Express.  Can you solve the case before the train reaches

Exit The Game: The Haunted Rollercoaster When you decided to board the haunted rollercoaster at the