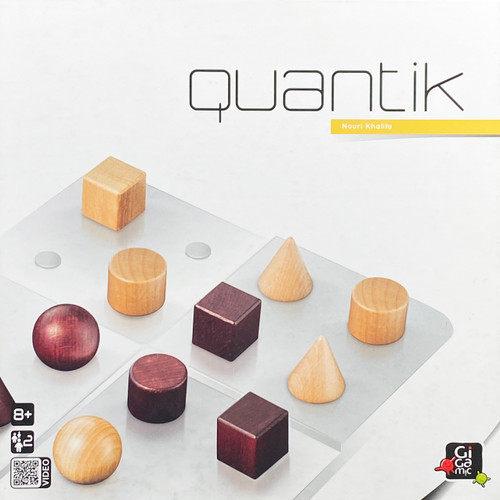 Quantik is a pure abstract strategy game. The goal is to be the first player to pose the fourth different forms of a line, a column or a square zone.

Each turn the players will put one of their pieces on the boardgame. It's forbidden to put a shape in a line, a column or an area on which this same form has already been posed by the opponent. We can only double a shape if we have played the previous one ourself. The first player who places the fourth different form in a row, column or zone wins the game immediately, no matter who owns the other pieces of that winning move.

Quantik feels a bit like a tactile, semi-cooperative but ultimately competitive Su Doku puzzle….except without the numbers…..or the writing……ok, so not like a Su Doku puzzle at all in fact, but you get what I mean….right? - Read more at Favourite Foe

OK Play.  OK Play is extremely easy to learn and play but can take ages to master. Up to four p

Okiya.  Okiya: The House of the Geishas is a simple and poetic game for two players. To win the

Noctiluca In the darkest depths of the jungle, the waters of the Cerulean pools shimmer with light a

NMBR 9.  In every game of NMBR 9, players attempt to score the most points by creating the