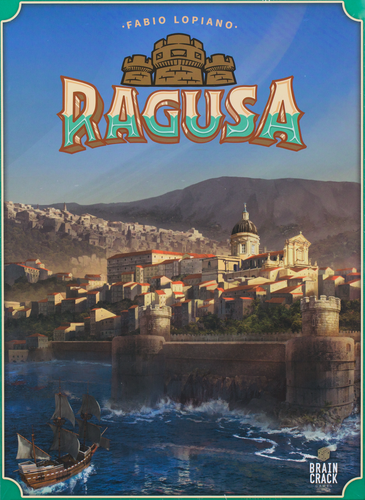 Ragusa is set in the Renaissance city of Ragusa, now Dubrovnik, in the 15th Century. Players undertake to build the city and its surrounding walls whilst striving to make use of its growing economy with the hope of finding their fortunes.

The game play is simple, players are asked to only make one choice per turn. Place houses between spaces and gain access to the resources or actions that those spaces represent. But your decision may lead to other players gaining valuable opportunities as in Ragusa some spaces reactivate the houses around them, whether they belong to you or to another player.

Ragusa combines worker placement, market manipulation and hidden objectives. The game ends when all houses have been placed and the player with the most points wins.

The second edition amends an error in the rulebook and iconography has been updated and the board has rule reference icons added to it. There was an error in the ship deck of the 2nd edition but replacement cards will be included with this purchase.

I really like how the game starts off slowly, and by the end, single placements trigger these avalanches of actions. The first couple of turns are simple, and you might get one or two things, but in those eleventh and twelfth turns you’re triggering so much stuff happening for so many people, and it’s enormously satisfying. - Read more at Punchboard

Gravwell, 2nd Edition.  In Gravwell, players command spaceships that have been pulled thro