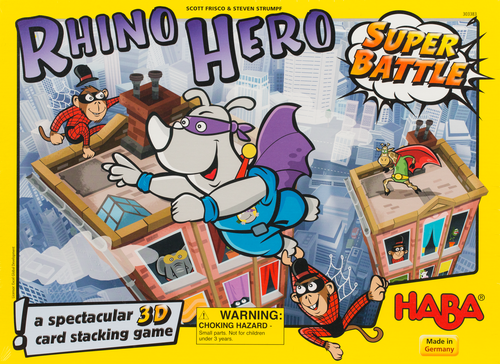 Rhino Hero, the fearless superhero is back but this time he’s not alone! Accompanied by Batguin, Big E and Giraffe Boy these four super heroes are ready for battle!

Rhino Hero Super Battle requires steady hands, concentration and luck on your side. The naughty spider monkeys will try to distract you from the task in hand but stay focused in order to win the battle.

Rhino Hero Super Battle is a tower building dexterity game that offers stacks of hilarious fun for the whole family.

Rhino Hero: Super Battle is a fun game for all ages. Our tabletop group got Super Battle because we had so much fun with the original Rhino Hero. - Read more at Big Boss Battle

Drop It.  Drop It is a colourful, inventive family game that is easy to learn, but deceptively

Jump In.  Jump In is as a single player children's puzzle game. The game comes with a book cont