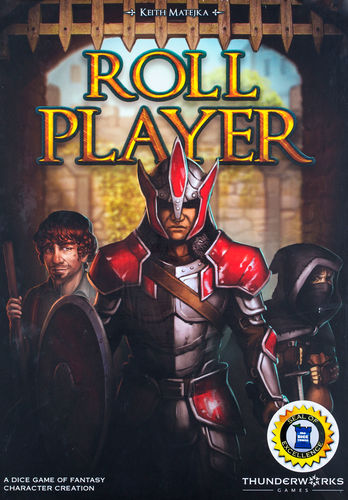 In Roll Player, you compete to create the greatest fantasy adventurer who has ever lived, preparing to embark on an epic quest. Creating your character is akin to developing your persona in an RPG.

You will be rolling and drafting dice to build up your characters attributes. While purchasing weapons and armour to kit out your hero. If your character has the greatest Reputation you will be victorious and will surely triumph over whatever adventures lieahead!

You can also add in expansions to the mix to enhance the game further.

Roll Player delivers on a lot of the features that I look for in a good game. It plays out in around an hour and each turn passes quickly and with good humour, thanks to the way in which each dice is drafted based on the initiative system. There isn’t a ton of interaction between the players in a mechanical sense, but you won’t miss that given the camaraderie and “banter” that takes place during the drafting. The actual pulling of dice and placement of them is both tactile and appealing both to the eye and to the mind — optimising dice placement to meet multiple objectives at the same time is incredibly satisfying. - Read more at Big Boss Battle

Roll Player: Monsters and Minions Expansion.  An abomination is terrorising villages throughout

Sagrada.  Sagrada is a popular game of dice drafting and window crafting. Each player construct

Bellum Magica.  In this fantasy adventure game you are an Evil Lord intent on becoming the rich