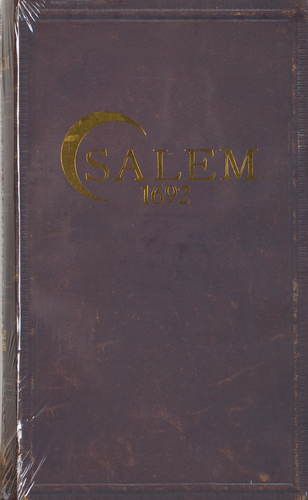 The witch hunt has begun!

The year is 1692 in Salem, Massachusetts. Players will each represent a unique character from the town and can read all about them in the instruction manual. Villagers include a local farmer John Proctor, a servant girl Mary Warren, the homeless beggar Sarah Good and the village pastor Samuel Parris.

In Salem 1692 players reveal accusation cards to attempt to flush out the witch. If all the witch’s Tryal cards are discovered then the townspeople win.

After dark players must watch out as night allows a witch to kill a player. Killing witches fast is essential in order to survive. Act quickly before conspiracy turn you against each other.

Will you be wrongly accused and hanged for witchcraft? Perhaps you will become a witch yourself an attempt to bring the town of Salem to its knees. Or maybe you will be the town hero and save the day by purging your town of witches!

Salem 1692 is designed to look like an antique leather book. The stunning an unique box design means that this box would be equally at home nestling on your bookshelf as it will with your board games.

This first volume in the Dark Cities Series by Façade Games is perfect for larger groups of friends. Every game you assume a different role and so the game is constantly changing.