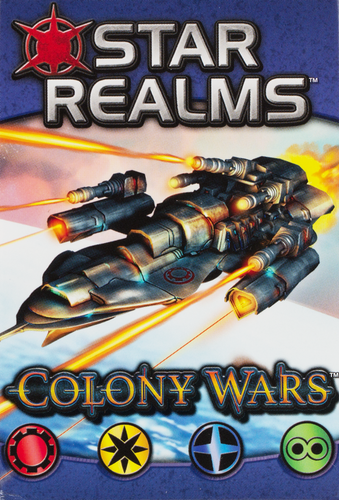 Colony Wars is a deckbuilding game in the Star Realms series which is both a standalone box set for two players (featuring an 80-card trade deck, as in the original) and an expansion for the base Star Realms set that allows it to be played as a four-player game.

In Colony Wars, as in Star Realms, players will start with a fleet (deck) of 10 basic ships, and can spend Trade to acquire more powerful ships and bases from a central trade row of 5 cards. This row is continuously replenished by random draws from the trade deck. Many ships and bases deal Combat damage which you can use to attack your opponent and/or destroy their bases. When you reduce your opponent's Authority to zero, you win.

Star Realms is a terrific two player option and frankly I adore it. I like that it isn’t the money sink that something like Magic The Gathering or Pokémon could be. Also, unlike those two, ultimately it is equal for each player as the marketplace is communal. You can therefore get to know the deck, the synergies and explore the array of different tactics available. - Read more at Board Game Review UK

Red Rising.  Based on the bestselling novels by Pierce Brown, Red Rising is set in the distant

Power Rangers Deck-Building Game It's Morphin' Time! Which side will you choose? In Power Rangers: D

Transformers Deck-Building Game with Bonus Promo Pack. Transform and roll out! The Autobots are brav