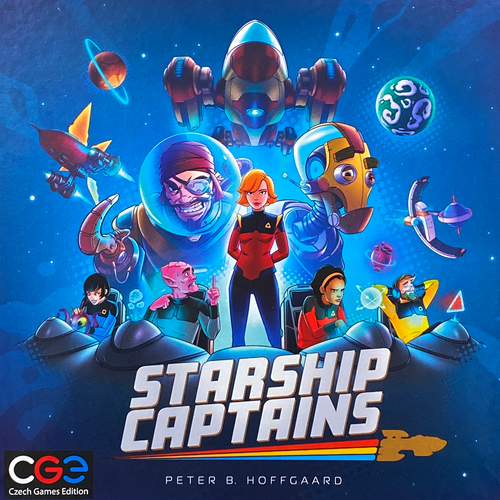 Welcome aboard and congrats on the promotion! Your "new" starship is ready to embark on its first big voyage. Just scrape off some of the rust, and she'll do fine. And that crew? Might look a little green around the edges, but they're your crew now. Make us proud.

The stars are calling...and adventure awaits!

As newly promoted Starship Captains, players are in command of their first starship and hungry to prove themselves in a galaxy full of space pirates, grumpy old androids, ancient artifacts, and interplanetary adventures.

In this 1-4 player Eurostyle game, which mixes action selection and engine building, you'll manage a diverse crew of cadets, ensigns, androids, and officers — each with different special roles and capabilities. By earning medals, you can promote and train your crew for even greater effectiveness. Similarly, you can upgrade your ship with powerful engine building technology for maximum synergy.

What will you do with this enhanced crew and ship? Explore an ever-shifting galaxy full of dangerous pirates and interplanetary missions in order to boost your reputation with three distinct galactic factions for bountiful rewards.

Do you have what it takes to deftly command your crew and become the best captain in the cosmos? We'll see!

Designed by Peter B. Hoffgaard

Wild Space.  A new Galaxy has just been discovered on the borders of the Empire! Commanding you

Space Explorers. The conquest of space was one of the greatest achievements of the 20th century.In 1

LUNA Capital.  The dream of maintaining human life on the surface of the moon has now come true