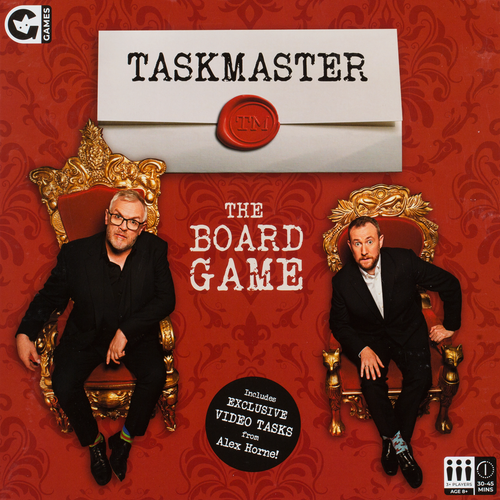 Taskmaster The Board Game.

In case you haven’t seen it (and you really should) Taskmaster is a hugely successful comedy panel show where five celebrities attempt to complete a series of ridiculous challenges in order to please the Taskmaster and score points.

Taskmaster: The Board Game takes on exactly the same format at the TV show. It is aimed at three to five players but if there is more of you then you can easily split into teams. Players take it in turns to take on the role of the Taskmaster while the other players carry out the challenges they have been allocated. The Taskmaster then distributes scores as they see fit.

Final challenge cards offer the optional and unique opportunity to bring Little Alex Horne to life. He will deliver the final challenge to you personally via the technological wonder of cards printed with QR codes.

Editorial Reviews of Taskmaster The Board Game

Taskmaster The Board Game is a blast of silly fun. It recreates and captures most of the magic of the show in your own home. With the right crowd (and possibly a tipple) this could create hilarious memorable moments that last a lifetime. - Read more at Board Game Review UK

The Crystal Maze Board Game

Don't Get Got (2021 Refreshed Edition).  Don’t Get Got is as much of a secret mission as a fun

What Next.  Introducing What Next, the brand new 'Pick-Your-Path' adventure game where you

20 Second Showdown (2021 Refresh).  Welcome to the ultimate showdown — your team vs their team