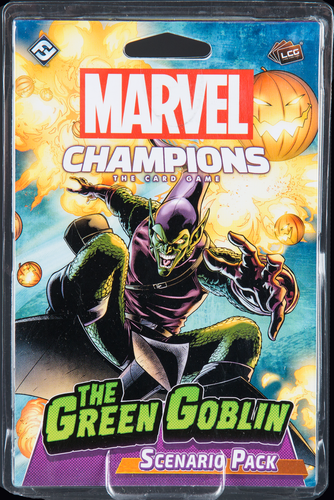 To many citizens of the Marvel Universe, Norman Osborn is an eccentric billionaire. A man who has put his demons behind him. The truth of the matter is Norman Osborn is always teetering on the brink of a relapse into the villainous Green Goblin. With advanced technology, superhuman strength, and regenerative healing, the Green Goblin is one of the Marvel Universe’s most frightening villains, and a longtime nemesis to Spider-Man.

But Norman Osborn rarely makes public appearances as the Goblin. As one of the richest men in the world, Osborn himself is virtually untouchable, making his human just as effective as the sadistic goblin. Can any team of heroes truly stand up to the might of Norman Osborn and the Green Goblin?

Continue your adventures in the Marvel Universe with The Green Goblin Scenario Pack for Marvel Champions: The Card Game! This 78-Card pack introduces two new scenarios and four modular encounter sets showcasing the devious Norman Osborn and his sadistic alter-ego, the Green Goblin.

Flyin' Goblin.  Flyin’ Goblin is all about riotous risk-taking and incredible precision. The Go

Equinox: Green Box In Equinox, mysterious creatures gather in the forest in an effort to write thems

The Once and Future Kang Scenario Pack

Village Green.  It's the first day of spring, and there's only one thing on everyone's mind — t