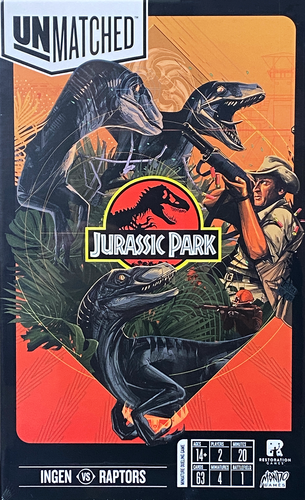 In battle, there are no equals.

"They show extreme intelligence, even problem-solving intelligence. Especially the big one." He has hunted many a dangerous predator, but against a pack of raptors, is Robert Muldoon the hunter or the hunted? In Unmatched: Jurassic Park – InGen vs Raptors, these clever girls use their speed and agility to surround their prey, getting stronger when they attack together. InGen's Game Warden and his Security Team lay traps to slow their opponent down and attack from range in a matchup 65 million years in the making.

Unmatched is a highly asymmetrical miniature fighting game for two or four players. Each hero is represented by a unique deck designed to evoke their style and legend. Tactical movement and no-luck combat resolution create a unique play experience that rewards expertise, but just when you've mastered one set, new heroes arrive to provide all new match-ups.

Reviews of Unmatched: Jurassic Park Ingen vs The Raptors

Unmatched: Jurassic Park Dr Sattler vs T-Rex.  In battle, there are no equals. "Dinosaurs eat m