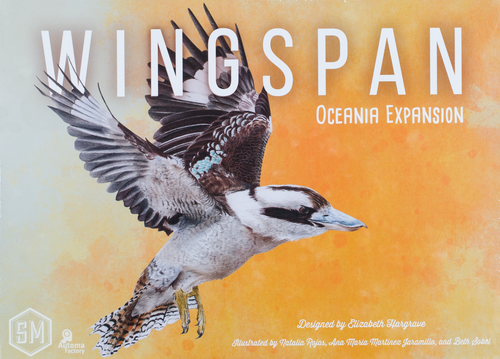 In Wingspan you are a bird enthusiast, which isn’t difficult to imagine when you see these beautiful cards and delightful components. Players compete over four rounds to collect birds, lay eggs and gain food. You will aim to attract the best birds to your wildlife preserve which includes habitats for grassland, wetland and forest loving birds. When performing an action in a particular habit many cards will offer you additional bonuses.

Wingspan: Oceania Expansion is the second expansion to the multi-award winning game. In this expansion you will find 95 unique bird cards featuring the colourful and exotic birds of Australia, New Zealand and other Oceania countries.

Also in the box you will find new player mats, 15 yellow miniature eggs and nectar tokens, as well as all the other components you need to make this game compatible with the original Wingspan base game.

Please note: you need Wingspan to play this expansion

The beautifully colourful birds of Oceania! There’s a lot going on with this expansion, including birds with game-end powers, new bonus cards, end of round goals, a new resource and new player boards! - read more at S vs J Board Games

MegaCity Oceania Megacity: Oceania combines light strategy and dexterity in a game where you build a