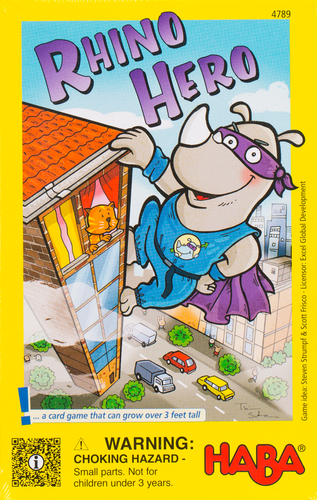 Rhino Hero, the fearless superhero is as strong as an ox, he is as smart as a fox but, unfortunately he is as heavy as a… Rhino! Not ideal when your super hero speciality is climbing the tallest buildings to look for notorious burglars and mysterious rogues. Even the most robust towers might start to wobble!

Can you help Rhino Hero complete his mission by building him a sturdy tower to climb? Rhino Hero offers stacks of fun for the whole family.

I played Rhino Hero with a group of 20-somethings and 30-somethings, without a child in sight. We had a blast. Stacking up the cards, picking on each other’s shaking hands, and forcing people to move the wooden character, all provided for a really fun experience. The game reminded a few players of Jenga — apart from the fact that you are building your own layers while attempting to mess up the building of the next player based on your own cards. - Read more at Big Boss Battle

Rhino Hero Super Battle.  Rhino Hero, the fearless superhero is back but this time he’s n

Unicorn Glitterluck – A Party for Rosalie

Unicorn Glitterluck - A Party for Rosalie.  The unicorns of Cloudland are planning a party! Gli