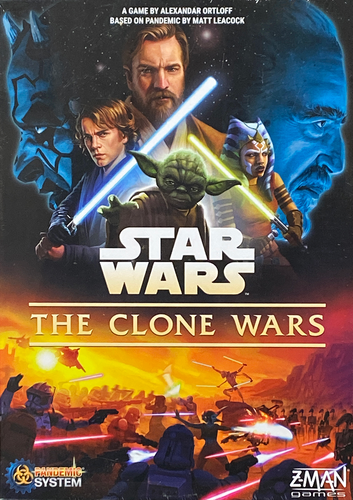 Traverse a galaxy where iconic Jedi heroes utilize the familiar gameplay mechanisms of the Pandemic series in Star Wars: The Clone Wars.

Planets under siege populate the game board as players take on the role of legendary Jedi traveling from battle to battle, teaming up and fighting off the Separatist threat. Battle droids attack on sight, and a planet invaded by too many will fall under a blockade, hindering Jedi from liberating it from the enemy or accomplishing missions.

Players must work together to confront the onslaught of droids by moving into their spaces and engaging them in combat, utilizing dice and squad cards to deal damage and push back the threat. In between battles, players move from planet to planet, battling more droids, crushing blockades, completing missions to turn the tide of war, and facing off against iconic villains.

Forbidden Desert.  Forbidden Dessert is the stunning sequel to the award-wining family cooperat

Forbidden Sky.  Forbidden Sky is the third instalment in this series of award-winning cooperati