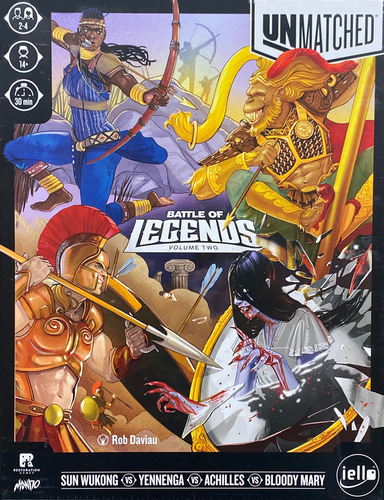 Unmatched is a fast-paced game of strategic combat that sees characters battle head to head against the most unlikely of opponents. Unmatched has an awesome double-sided game-board featuring two playable maps. Any combination of heroes and maps can be used across this, and other, Unmatched editions.

Choose your favourite hero with their miniature and use their unique deck and abilities as you fight to the death! Hugely replayable with dozens of possibilities and new challenges in every game. Beautifully balanced asymmetric player powers provides some thrilling battles. Althought the publisher says this plays up to four in team mode, we really only recommend this as a two player game.

Unmatched: Battle of Legends, Volume Two includes the following legendary characters to battle with:
Yennenga Warrior Princess, leading the charge with her archers to divide and conquer.
Achilles, with his brother Patroclus and the blessing of Hermes for a formidable team.
Sun Wukong, ox, tortoise, pheonix and sly monkey. Alonside his army will bewilder opponents.
Bloody Mary, stare into the mirror and speak three times, Bloody Mary will be closer than she appears!

Unmatched: Robin Hood vs Big Foot.  Unmatched is a fast-paced game of strategic combat that see