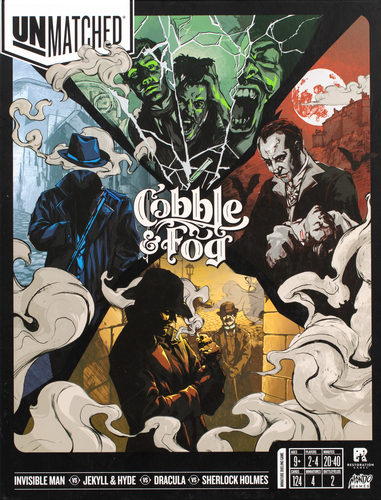 Unmatched is a fast-paced asymmetric game of strategic combat that sees characters battle head to head against the most unlikely of opponents. Unmatched has an awesome double-sided game-board featuring two playable maps. Any combination of heroes and maps can be used across this and other Unmatched editions.

Choose your favourite hero and use their unique deck and abilities as you fight to the death! Hugely replayable with dozens of possibilities and new challenges in every game.

Sherlock Holmes accompanied by his faithful sidekick Watson. He’ll figure out your next move without any trouble. It all seems rather elementary to him!

Bloodthirsty Dracula and his sisters will have you surrounded given half a chance.

Jekyll and Hyde. The complicated nature of their relationship might make it hard for you to predict what they might do next. But be sure, these two sides of the same man are both out to get you!

The Invisible Man will creep up behind you before you can do anything to stop him and, before you know it, he will have disappeared again into the fog.

Fog of Love Playing Fog of Love is like starring in your own unique romantic comedy. You will create

Unmatched: Battle of Legends, Volume 1 Unmatched is a fast-paced game of strategic combat that sees

Fog of Love Diversity Cover Playing Fog of Love is like starring in your own unique romantic comedy.