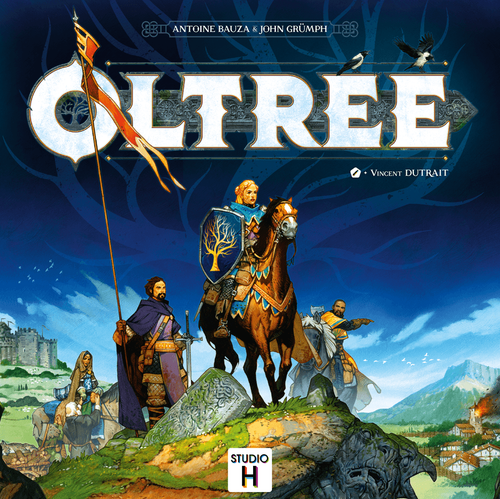 Oltréé is a cooperative game. With your fellow Rangers you will work together to meet the challenges and adventures set by the Chronicle, each offering a rich and unique setting, with its atmosphere, unique plot, friends and foes!

Oltree is a cooperative and narrative game where each scenario, called Chronicle, offers a rich and unique setting, with its atmosphere, unique plot, friends and foes! At the start of their turn, the Ranger rolls the Adversity die to activate the decks of cards representing the different aspects of the scenario. Depending on the results new Adventure cards spawn on the board, some villages fall prey to Issues, Events offer temporary rule challenges or the pages of the Chronicle turn, progressing the storyline and unveiling some new challenges.

The Ranger then performs two simples actions among the selection: moving between the outside zones and the central fort, venture out to meet communities each offering you benefits, interact with Adventure or Issue cards on the board, spend some acquired resources to reinforce the regiment's fort, performing some actions allowed by the scenario or your character... The choices to manage your actions will be crucial under the pressure of the scenario and defeat conditions. Some actions will require Skill performed by rolling some custom dice depending on your Ranger's abilities. The game continues until the Rangers have achieved the objectives specific to the Chronicle, completing their quest.

Destinies.  Destinies is the first of its kind. A unique and innovative competitive story-drive

The Adventures of Robin Hood

The Adventures of Robin Hood.  The year is 1193, and the county of Nottinghamshire, England is